The hikes of Olympic National Park are overflowing: long strands of moss, a canopy of enormous leaves, trees curtained with fronds fanning the trails. And then you emerge onto a beach or mountain top—it’s like three worlds in one!

An all-day drive plopped me at the northwest corner of Olympic National Park and a camp on the beach in the evening.

In that small sandy cove nestled against the rainforest my mind was overwhelmed by the landscape, the interconnectedness of the ecosystems. Massive green leaves hung over my tent, tidepools absorbed the ocean surf, and a unique remoteness transported me into a totally foreign environment.

The few expectations I had dissolved in that first sunset over the Pacific, as striking as the ones along the best Joshua Tree hikes, waves crashing with a dull thud providing a perfect white noise to drift off to. Tomorrow, I would begin thru-hiking the Pacific Northwest Trail.

Pros and Cons of Hiking in Olympic National Park

Access to four different bioregions
Diverse and abundant wildlife
Many different trails and hikes of all distances
A long drive from any major city
Extremely rainy: the wettest area in the lower 48
Hard to access the interior of the park

Getting to Know a Place On Foot

Growing up, we were never the family to simply drive a loop in a national park and check it off the list. We were the ones that backpacked three miles into a lake, stayed three days, and then did so three years in a row to make sure we thoroughly experienced it.

Backpacking is still my preferred mode of immersion, but I have expanded my daily miles. That’s what brought me to hike in Olympic National Park. 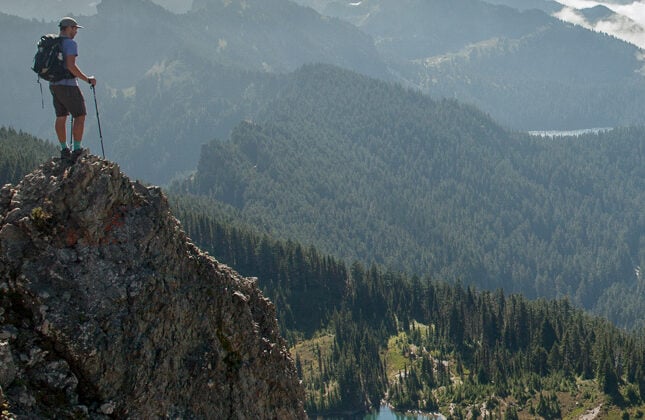 Olympic National Park Is Unlike Any Place I’ve Been To

Routes that explore so many different environments are at the top of my list, and with the Pacific Northwest Trail climbing from the beaches of Olympic to the heights of the Continental Divide, I didn’t need much convincing to give it a go. What I wasn’t expecting was just how sundry the hikes of Olympic National Park (and Washington as a whole) were—it felt like I passed through three seasons in only a few days.

Things started with tide charts, wading through saltwater along the coast before my route left the sand for rainforests and I was glad I packed an umbrella—gobs of green moss dangled off towering trees, dripping. Climbing higher into the Olympic Mountains on the Bogachiel Trail, the moss disappeared, replaced by snow. It was as if everything had been whited-out.

The park nearly touches the northwest corner of the contiguous U.S., sitting on a peninsula consisting of a million acres. It’s the 13th largest national park in the country, the wettest with over 200 inches of rain a year, and not so easy to get to.

About three hours driving from Seattle—the closest major city—planning for weather, supplies, and camping before visiting is paramount. this isn’t like hiking in San Diego — if you forget anything, it’s a long way back. On the hikes, you’ll quickly find that trails range from sand to mud to snow with rain at any moment—weather changes quickly and ecosystems end abruptly, often with very little refuge from the elements. To compensate for the continual washouts and erosion, some trails have ladders and ropes.

It’s not what I expected, but was happy to find them!

In the end, Olympic was one of the highlights of my thru-hike, and I now make it a point to recommend the area to anyone in the PNW looking to explore a unique environment—and who isn’t afraid of being a little waterlogged. To help you experience the full-breadth of the park, here are five of my favorite hikes in Olympic National Park.

1. Hurricane Hill via Hurricane Ridge for views in every direction

This is one of the best hikes in Olympic National Park to get a glimpse of its massive size—the views starting before you even leave the parking lot. Following three switchbacks, summit the 5,757-foot Hurricane Hill for a 360-panorama of the entire upper Olympic Peninsula. You’ll have sights of the Strait of Juan de Fuca, Port Angeles, and even Canada — a view to rival the best hikes in Yellowstone.

It is a gentle but continuous out-and-back, gaining about 650 feet along the 1.6 mile route. Similar to the best Grand Canyon hikes, the exposure, altitude, and landscape offer no escape from any hazardous weather, so packing clothing for rain, snow, and even hot weather is recommended.

2. Get your feet sandy hiking from Rialto Beach to Hole-in-the-Wall

A trip to Olympic National Park isn’t complete without a hike on the beach. From Rialto Beach to Hole-In-The-Wall there is no real trail. Rather, the beach is the pathway, and the footprints of others lead the way. Like backpacking in Big Sur, bringing a map to identify the islands and notable rocks just off the coast will enhance the experience.

On my way to Hole-In-The-Wall, I took off my shoes and enjoyed the sand between my toes. Bald Eagles perched in trees and crashing waves under the blue sky made it an ideal visit. When I got to the arch, the tide was out so I could walk through its interior.

This four mile out-and-back brings the possibility of seeing whales, sea lions, otters, and eagles, A small creek runs down the sand to the ocean roughly halfway to the arch and requires either walking across a log or trudging through the sandy water.

This difficult hike is a 19-mile permitted route that may be the worst kept secret of Olympic. However, if you do navigate the reservation process (which runs from July 15 to October 15 this year), an epic campsite awaits. Most people complete this in a counterclockwise direction, which offers the simplest logistics for arriving at the lakes to camp on the first night. While you are up there, consider tagging Bogachiel Peak with a short side trip.

The trail begins at Sol Duc Falls trailhead and immediately begins climbing through the old growth forest. A river flows nearby and the large trees mute any sounds from outside. Further up, past Deer Lake, you eventually leave the forest, with the trail getting more rugged as you gain the exposed ridge. Beware that weather moves in quickly, so be mindful as you’re taking in the views.

Spoiler: Seven Lakes Basin has more than seven lakes, which only adds to the magic of the backpacking route. I most enjoyed Lunch Lake and Heart Lake Basin, and the view of Mt. Olympus popping out above the clouds. Because of the alpine terrain, cold weather, and lingering fog, it was a stark contrast to my nights camped at the beach.

Sol Duc Falls is the shortest and the easiest hike on this list at 1.8 miles round trip with 200 feet of elevation. Still, that doesn’t mean it isn’t an essential part of a visit here—the trail will redefine what you consider a lush, old growth forest!

This family-friendly hike starts just past the site of the Sol Duc Hotel (destroyed by fire in 1912). Shade encompasses the majority of the route with a thick forest canopy overhead—solitude is only broken by the roar of the falls. Ever changing, the falls split into multiple channels and cascades.

5. Build your own adventure on the Hoh River Trail

The moss throughout the Hoh Rainforest is so vibrantly green that it requires sunglasses. And an umbrella. With over 200 inches of rain a year, it is the soppiest forest in the U.S., which helps make it home to a thriving animal population to rival the best hikes in Yellowstone.

For the full experience, the Hoh River Trail is a 19 mile out-and-back to Blue Glacier. Remember that 19 miles up also means 19 miles back down, so most people either do a shorter hike or camp at the reservable backcountry sites available along the way. A typical day hike can be as short as two miles out-and-back with no loss in the experience.

As I hiked the length of the Hoh River Trail, I enjoyed finding the largest leaves possible and using them as umbrellas in the rain. The magnitude and scale of the trees, growth, and greenery makes the forest look as though there could be a secret colony of dinosaurs living within it.

Depending on when you are planning to visit, craft your itinerary carefully around the conditions. Because the national park ranges from sea level to nearly 8,000 feet it is important to consider packing four seasons’ worth of gear. Snow, rain, and baking sunshine are all possible on the same day.

Where to sleep in and near the park

I really enjoyed staying at Hoh Campground. There was access to the small town of Forks as well as giant mossy trees all around on the edge of the rainforest. Free dispersed camping is also available on the patches of national forest land.

Bear cans are required to camp here. The entire 70 mile wild coastline, Seven Lakes Basin, Enchanted Valley, Royal Basin, and Sol Duc River all require bear cans along with anywhere where food cannot be hung at least twelve feet high and ten feet from a tree. Bears, mice, and raccoons are all known to get into the food of backpackers in Olympic.

National Park Passes are required and can be purchased prior to your visit. Once inside the park, there are designated parking lots for each hike.

Absorbed in the Landscape

The diversity of Olympic National Park is unmatched. One day I was uncovering clams on the beach only to climb into mountains and snow the next. I learned to combine skills I never thought were part of backpacking and was forced to mind the changing weather; to carefully consider my timing through exposed ridgetops and incoming storms.

To be here is to be inexplicably linked to the elements, from the precipitation thundering down in the rainforest to the massive peaks surrounding me on the final nights in the park. The beauty was in the contrasts, the diversity, the stark differences… the ever changing. And that’s why I recommend Olympic National Park for any hiker—you simply can’t help but to be absorbed in the landscape here, waterlogged boots and all. 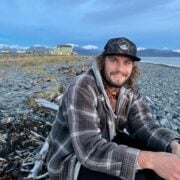 Jeff Garmire is a professional endurance athlete, speaker, writer, and author. In his book “Free Outside” he details his 8,000-mile journey hiking the Calendar Year Triple Crown, completing the Appalachian Trail, Pacific Crest Trail, and Continental Divide Trail in eight months. Jeff got into backpacking while taking a term off of college and somehow landed upon hiking the Pacific Crest Trail. Jeff currently has 17 speed records on long distance trails. 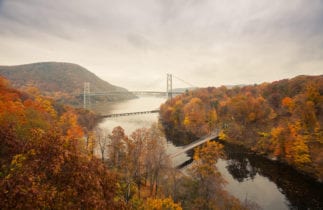 Bear Mountain Hiking — A Perfect Escape From the Big Apple 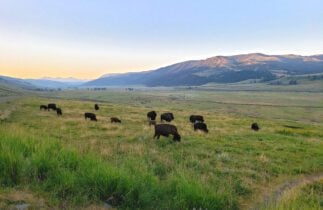 The Best Places to See Wildlife in Yellowstone 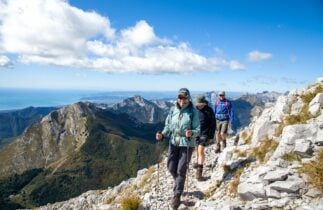 Hiking in Tuscany: The Secrets of the Garfagnana Valley