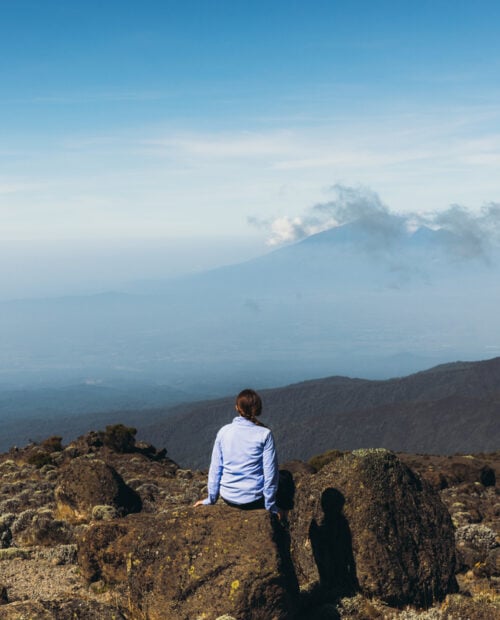 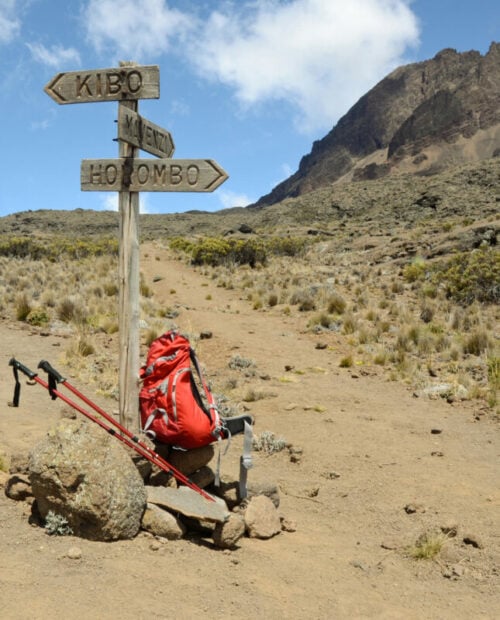 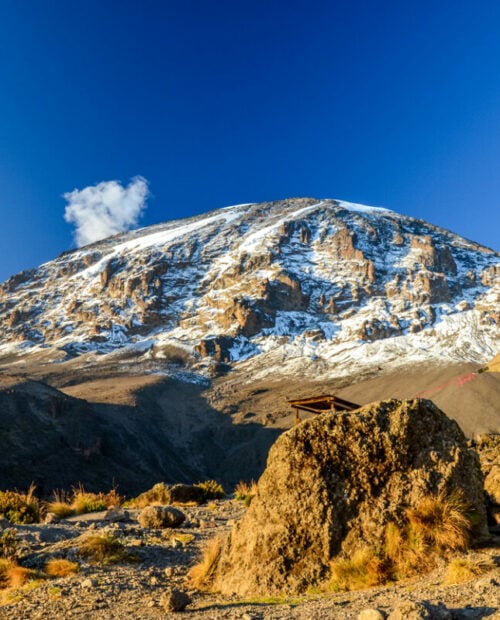 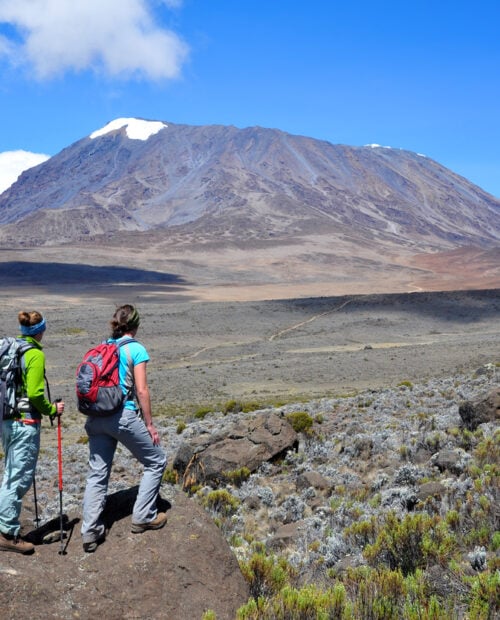 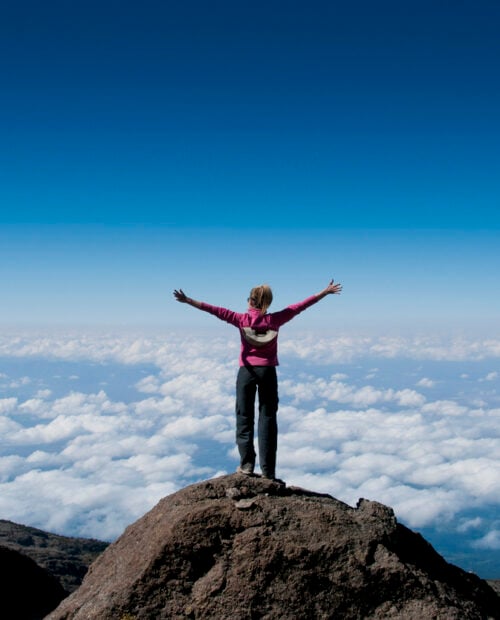 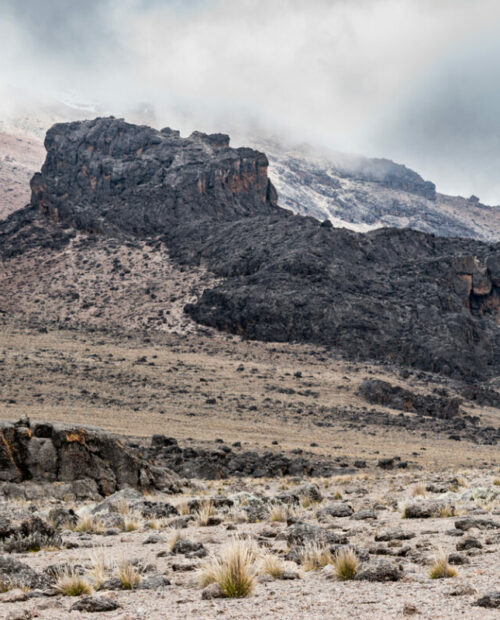 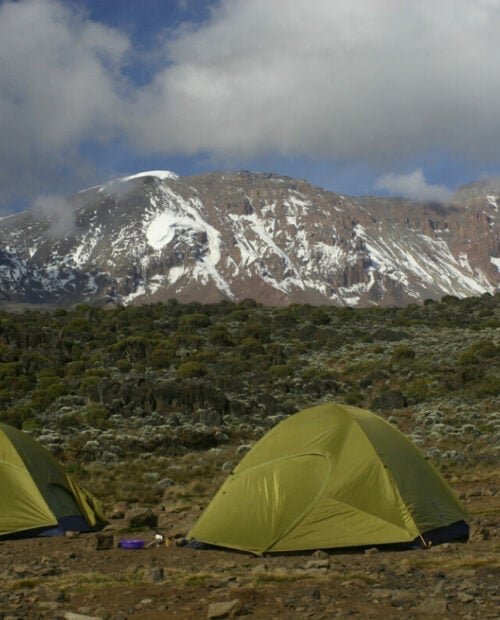 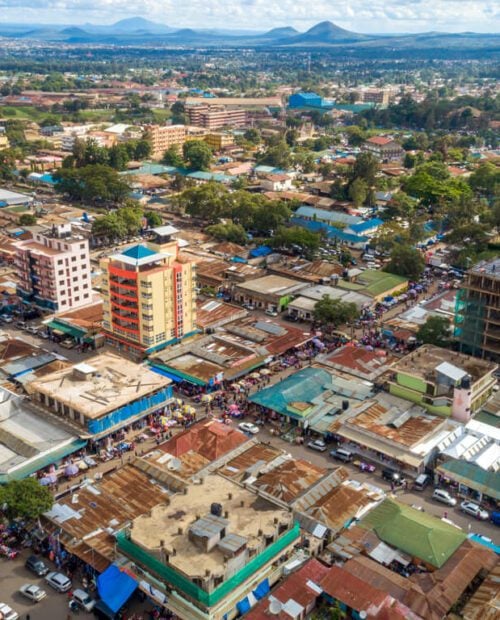 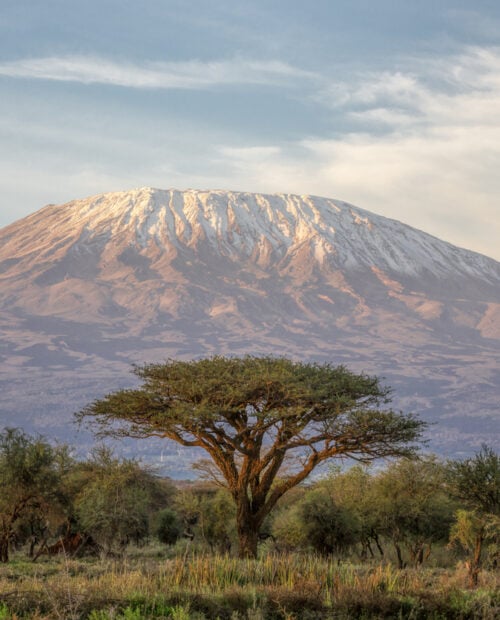 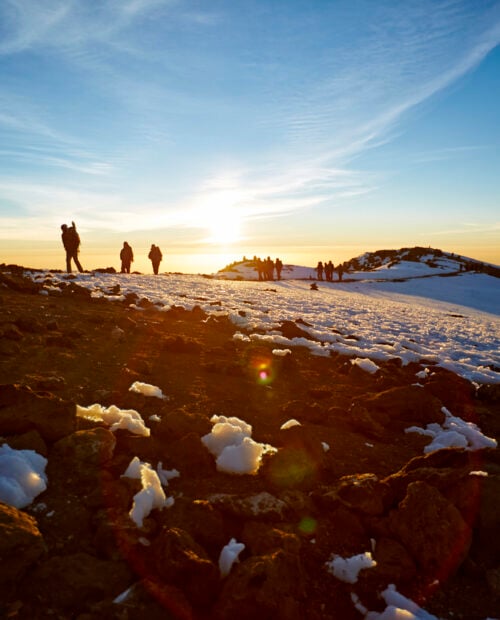 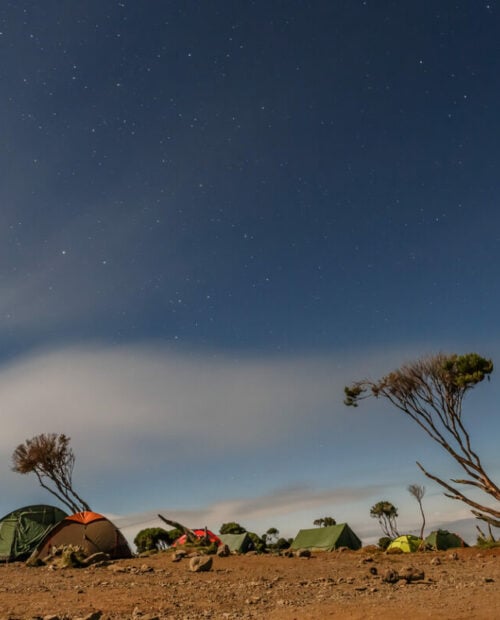 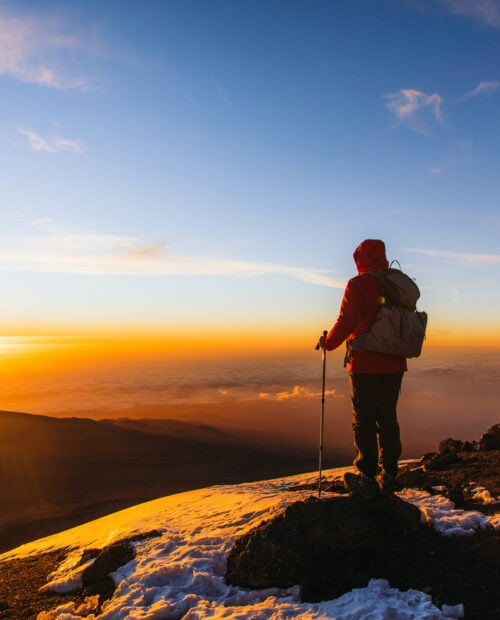 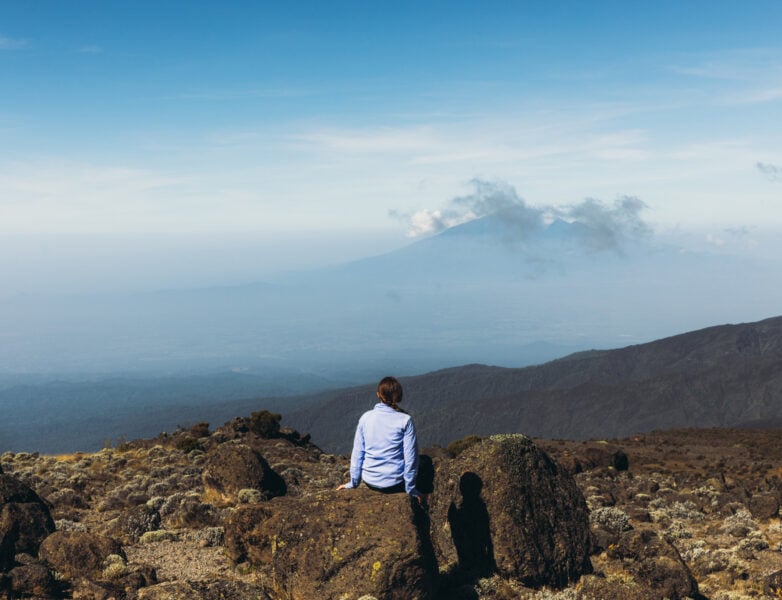 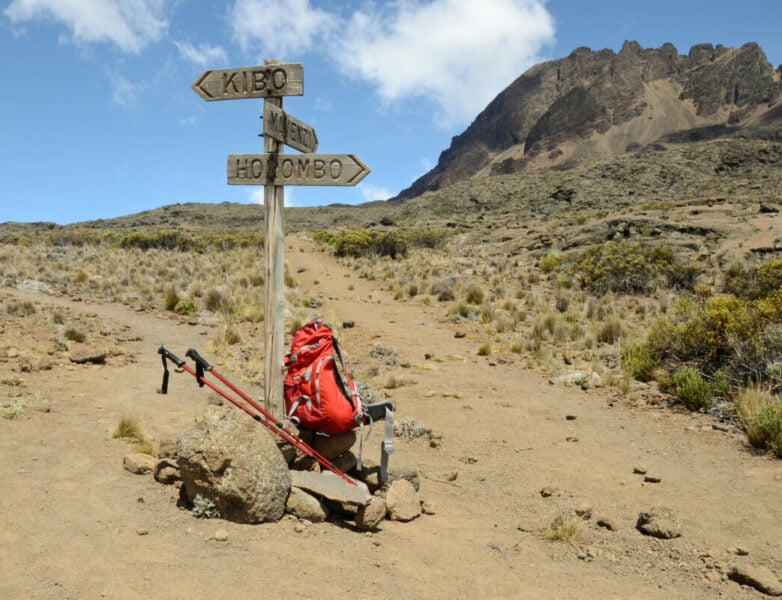 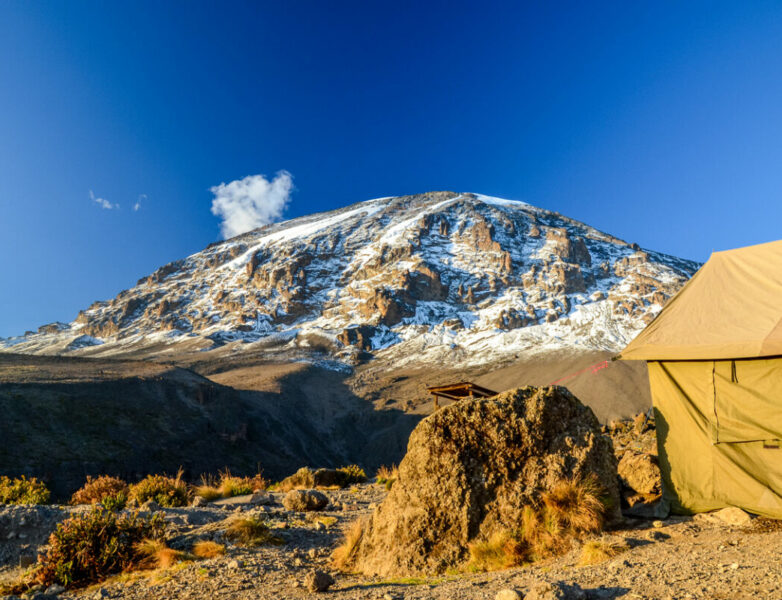 Top reasons to climb Kilimanjaro via the Machame Route

Standing proudly at a magnificent 19,341 feet, Kilimanjaro is the highest mountain in Africa and the tallest free-standing mountain in the world. And with the extreme heights come the even more extreme environments — lava tubes, massive glacial valleys, and craters abound, reminding climbers of Kilimanjaro’s volcanic nature. The hike to the Roof of Africa isn’t technically difficult, but it’s long and often quite steep, meaning that it will test your stamina at times. However, it’s a fantastic journey that every hiker should undertake at least once in their lifetime. In the lower parts of the so-called Whiskey route, you will traverse unique Afromontane forests with fascinating plant life you won’t find anywhere else in the world. As you ascend higher, you’ll find yourself surrounded by volcanic craters, snowy peaks, and alpine deserts. And after you get to the top of the magnificent Uhuru peak, you’ll get an adrenaline rush and confidence boost like you’ve never experienced before. The Cradle of Humanity is calling you. Gather your inner courage and answer the call — you won’t regret it!

7-Day Climb via the Machame Route

Hike and explore Kilimanjaro’s marvelous nature with this seven-day tour that ends with an ascent to the Roof of Africa! Conquer the highest peak in Africa and the tallest free-standing mountain anywhere! Explore an amazingly diverse landscape that never gets dull — from lush Afromane forests and endemic flora to glacial valleys, lava tubes, and volcanic craters, the nature here is incredible. Stay in high-quality tents, eat excellent food and climb with an experienced and attentive crew who will make sure you get the hiking experience of a lifetime.

A driver will pick you up from the airport and take you to your hotel. The staff will make sure you settle in and relax after the flight. Later on, your guide and the Climbs Manager will brief you thoroughly on what to expect on the mountain. They will also conduct a kit check to make sure you have everything you need for the trip.

After breakfast, depart to Kilimanjaro. After finishing up with packing and some final formalities, your trip will start from Machame Gate at 1,800m altitude. Hike through verdant Afromontane forests to Machame camp, where you will have a picnic lunch surrounded by endemic flora and a graduation of forest zones! Spend the night at Machame Camp.

Make your way to Shira Camp. The first section of the hike is steep, and you’ll gain altitude rapidly. Have a picnic lunch on the trail. Pass through what’s known as the “health zone” and marvel at the one-of-a-kind helichrysum and lobelia plants. You’ll also see some unique geological features, such as lava tubes and glacial valleys! Spend the night at Shira Camp.

A walk-high-sleep-low day! Ascend into the alpine desert and, if you’re feeling up to it, take a trip to the monumental Lava Tower before getting to Barranco camp, famous for its giant groundsels. Enjoy a nice picnic lunch on route. While this is a long day, it’s also an opportunity to get acclimated to the altitude and the climbs that lie ahead! Spend the night at Barranco Camp.

After the challenging climb, today’s short hike will be just what the doctor ordered! Ascend the Barranco wall and hike glacial valleys to Karanga camp, where you will have your lunch break. If you want, the guides can take you on an afternoon walk and show you some great views of the southern walls of Kibo and deep glacial valleys. Spend the night at Karanga Camp.

Ascend to Barafu camp. Have a filling lunch, kick back and relax before the summit bid. The terrain here is tough — strong winds often rip over this campsite in the desolate alpine desert. However, the magnificent evening views of Mawenzi peak make the struggle worth it. After a relatively early dinner, rest for the evening. You’ll need it. Spend the night at Barafu Camp.

Here’s where you get to show what you’re made of! Depart before midnight for the final summit bid of the 19,341-foot-tall Uhuru peak via Stella Point. Patience and Persistence are key here. Arrive near the rim by dawn, as the first rays of light start to appear. All that’s left is to conquer a relatively short final section to Uhuru peak, the Roof of Africa! Get back down to Mweka camp as a better, more confident climber. Spend the night at Mweka camp.

After a hearty breakfast, descend through some more Afromontane forests. After saying your farewells with the crew, get picked up and taken back to Ngare Sero lodge for a well-deserved shower!

Julian is a highly experienced safari guide, rock climber and mountaineer,.and owner of the African Ascents Ltd. His climbing career was nurtured from an early age, and he summited Mt Kenya’s second-highest peak at only 17 years old. He has plenty of experience in guiding both trekking and technical climbing on Mt Kenya and Kilimanjaro and safari adventures in several parks in the northeastern part of South Africa.

Since 2012, African Ascents have been completely dedicated to creating unique trekk...
View details

Since 2012, African Ascents have been completely dedicated to creating unique trekking  and mountaineering experiences, first class technical climbing adventures, and unparalleled rock-climbing experiences in East Africa and around the globe.

David A. about African Adventures on TripAdvisor

I just returned from an excellent 3-week trip organized by African Ascents. I climbed Mt. Meru and Mt. Kilimanjaro in Tanzania with Julius as our guide, and Mt. Kenya (Lenana, Pt. John, Nelion and Batian), Mt. Satima and Mt. Longonot in Kenya. African Ascents provides highly qualified staff, great food and a very well organized trip. Thank you for everything you did to make this trip possible.

We also expect clients to respect local regulations and take measures to protect themselves, guides, and the communities they’re traveling to. For more information on COVID-19 measures in Machame, Kilimanjaro, please refer to the Center for Disease Control and Prevention.

This climb is best suited for those who have previous experience with endurance endeavors and backpacking, but it is suitable for first-time trekkers and mountaineers as well. Kilimanjaro has plenty of options for beginner climbers, and this 7-day adventure is a demanding trip yet suitable for first-time trekkers with excellent fitness and a desire to push themselves in a mountain environment. Certain sections of the trail are strenuous, steep, and more demanding. Still, it does not require technical skills or mountaineering equipment such as ice axes, crampons, harnesses, and ropes. Your instructor’s number one priority is your safety. As long as you listen to the given instructions, you’ll succeed in completing your climb.

All climbing and camping equipment will be provided by your guiding service. Here’s what you’ll need to bring:

For camping, you need to bring:

Dress comfortably and for the weather in clothes you can move in. We suggest bringing clothing appropriate for the season. Layers are best and don’t wear jeans. Keep in mind that it can get very cold in some of the camps due to strong winds.

A porter can carry a max of 18kg/39.6Lbs, including food, accommodation, wages, etc. There will be multiple porters depending on the amount of baggage and in case your baggage weighs more, you can hire another porter for an additional fee.

Climbing days on the Machame route can be arranged for bigger groups. Contact us prior to booking.

Registration for an adventure with your guide requires a 50% non-refundable deposit. The balance of program fees will generally be due 90 days prior to the starting date of the program. It is your responsibility to adhere to the fee payment schedule. Late payment will result in cancellation of program reservations and forfeiture of all fees paid.

If your guide has to make an alteration to the time of departure or return to the your home exceeding 12 hours between the date of your booking and the date of departure to, you can decide no to proceed with the booking. In that case, you can:

If your guide increases the basic price of the trip by 10% or more and you do not wish to continue with the trip, you may cancel your booking and get a full refund in respect of the basic cost of the trip but your guide will not be responsible for other incurred costs.

Should you cancel for any other reason the following charges will apply:

If your guide is forced to cancel your trip, you will be given the opportunity either to:

If the reason for the cancellation less than 8 weeks before the advertised departure date is a lack of bookings, a compensation of $30 per properly booked person will be paid.

To get to Kilimanjaro, you first have to reach Arusha. To get to Arusha, most people fly into Kilimanjaro International Airport. From there, you can rent a car or take a shuttle. Julius Nyerere International Airport in the capital of Tanzania, Dar es Salaam, is 2 hours away from Arusha by plane. The cheapest way to reach Kilimanjaro is by flying into Nairobi, Kenya, and taking a connecting flight. If you’re feeling adventurous, it is also possible to travel by road from Kenya, as there are numerous bus and shuttle options.

Once you and your guide agree on the details of your itinerary, your guide will suggest the best place to meet, whether that’s at the airport or a predetermined location. The guide will choose the appropriate terrain dependent on conditions and the ability of the group.

Other things to do in Kilimanjaro 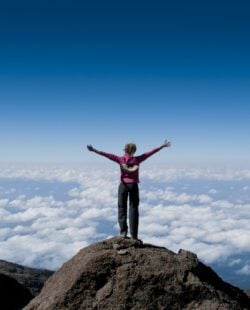 View all adventures in Tanzania