While many skiers don’t think of Quebec as a ski touring destination, in the Chic-Choc Mountains, backcountry skiing is as good as it gets in Eastern Canada. With amazing tree skiing, couloirs, and plenty of open glades, it’s an almost-western skiing experience in the east. Access is easy. You’ll find plenty of options for any skill set. Plus, you’ll be greeted by a culture and atmosphere totally unique to other Canadian destinations.

The Chic-Chocs are worth the trek

The Chic-Chocs are some of the oldest mountains in Canada. With open bowls reminiscent of Colorado, tree glades that share a strikingly similar feel to BC, and snow that can hold its own against the best European spots, Chic-Choc ski touring is a definite must for anyone adventuring on the east coast. The views are truly amazing as they run dead parallel with the St. Lawrence River. This spot is out of the way (a seven-hour drive from Quebec city). The payoff is that Chic-Choc is far less crowded than other top backcountry ski spots. Look in and around Murdochville, Quebec, for places to stay. If you want to make it a truly epic backcountry trip, consider a lodge like the Chic-Choc Mountain Lodge. 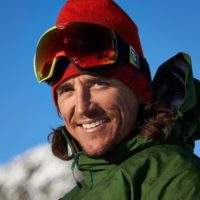 Greg Hill is known far and wide for incredible first ascents and all around skiing prowess. He’s also a good friend of 57hours. His on mountain accomplishments are too many to list here, but he’s been known for skiing the odd 2,000,000’ in 2010; he skied 50,000’ in 24hrs because he can. Oh, yeah, he also climbed and skied 100km in the month of March 2014. Not too shabby. Of late, Greg’s changing the world one adventure at a time with his Chevy Bolt. Zero-emission skiing and adventure.