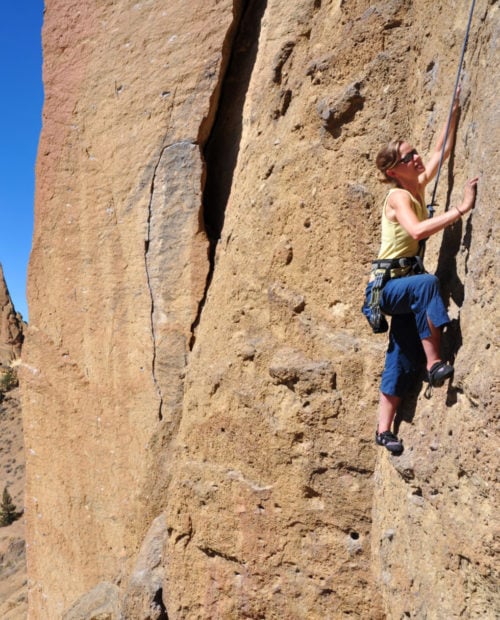 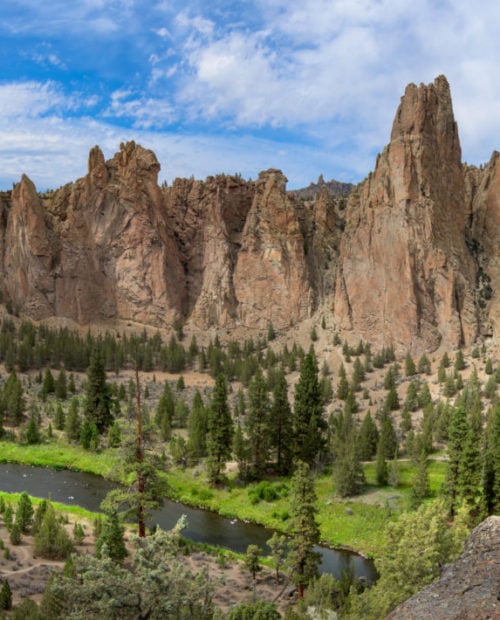 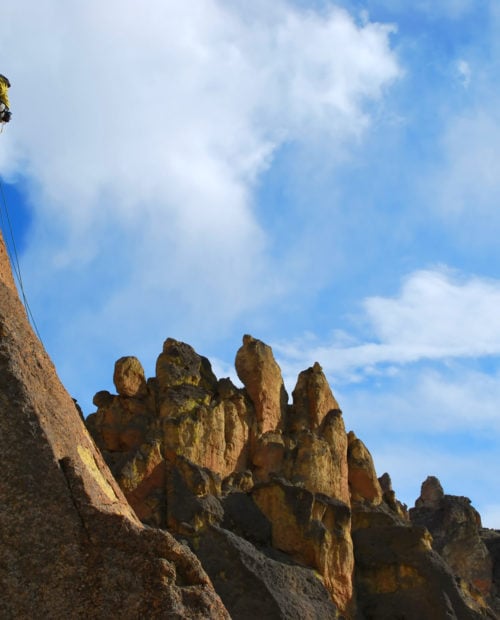 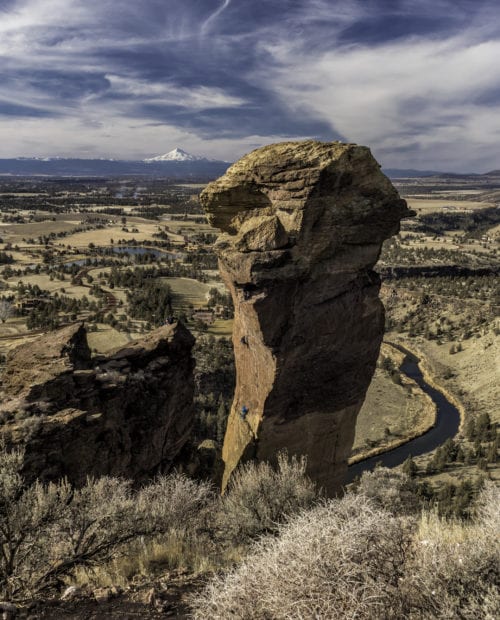 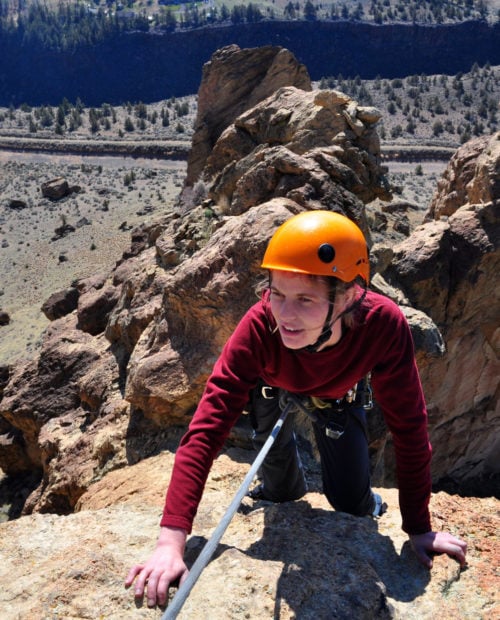 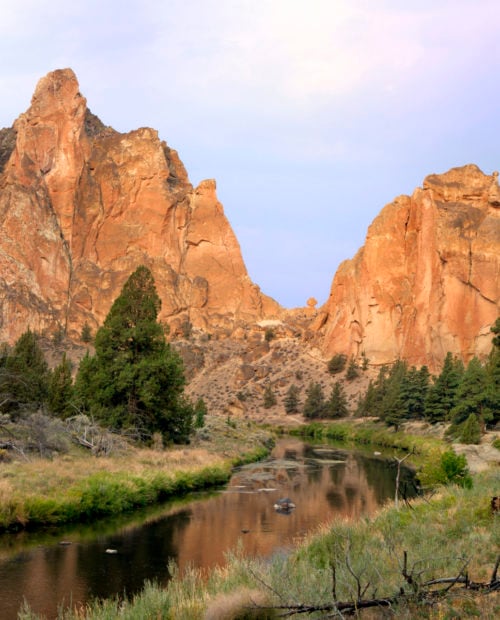 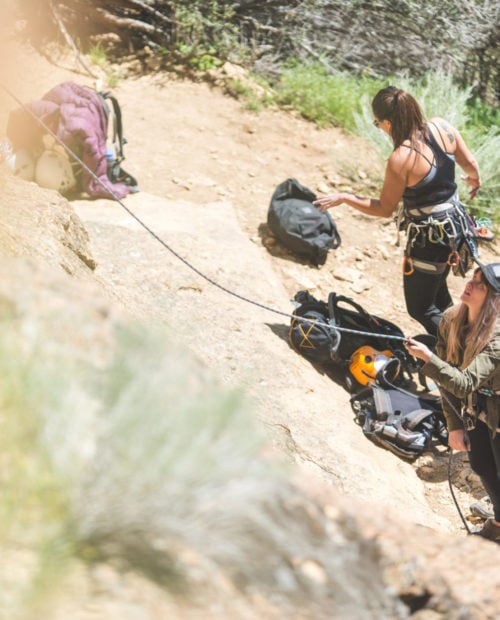 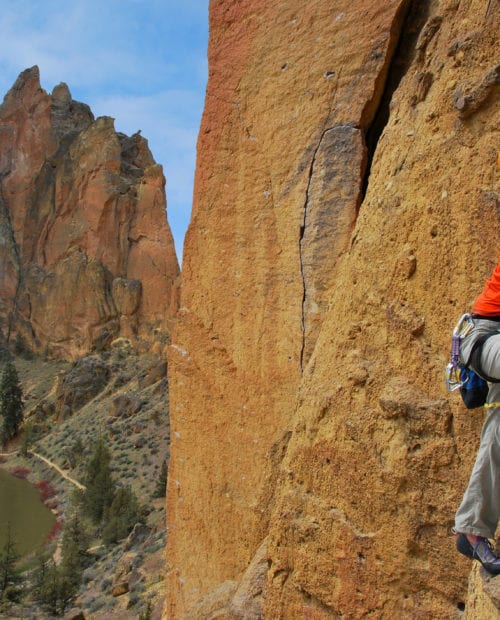 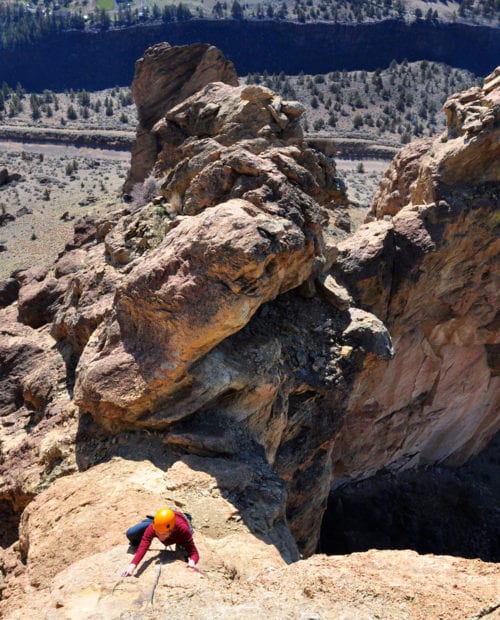 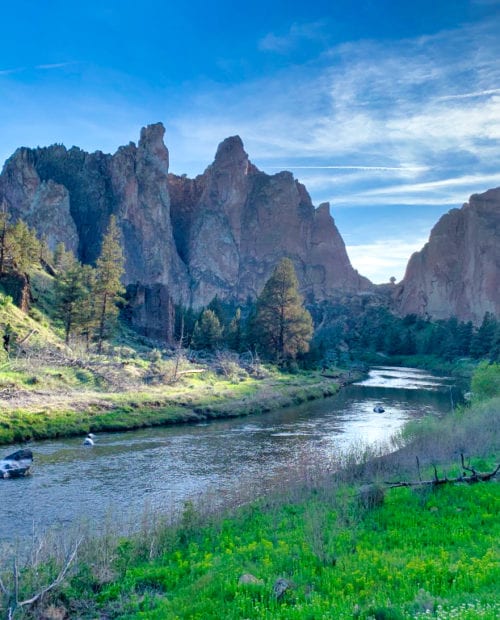 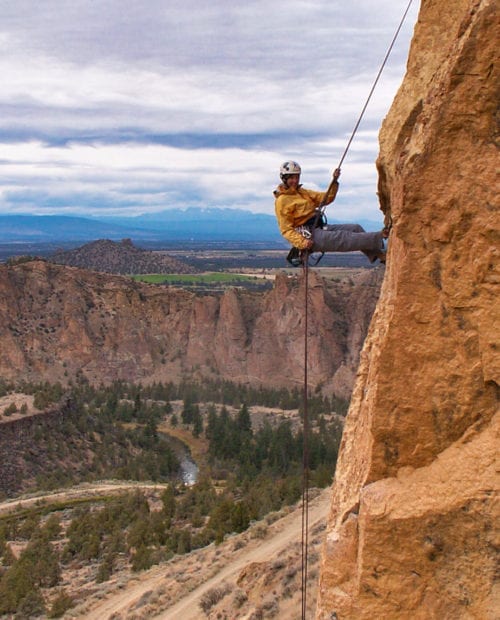 Bend, OR a half hour’s drive

Smith Rock State Park, in central Oregon’s High Desert, is considered by many as the birthplace of American sport climbing with over 1,500 routes. But if sport climbing isn’t for you, there’s also trad climbing, multi-pitch climbing, and bouldering. The area is composed of volcanic basalt and tuff to keep climbers of all abilities coming back for more. The park is also home to Scarface, the U.S.’s first climb rated at 5.14. Because of Smith Rock’s destination status for climbers, central Oregon has seen tons of development since the 1960s, establishing new routes over the ensuing decades.

Boasting over 1500 climbing routes of varying length and style, on only 650 acres of land, Smith Rock packs a sunny punch.

A Customized Day of Climbing With a Private Guide

Whether you’re just gaining your climbing legs or you’re already experienced, a custom day of guided climbing will have you accomplishing your objectives. You’ll feel challenged by the variety of holds you’ll encounter in vertical terrain and discover hidden gems. Focus on skills instruction or tick one of the areas classics off your list, all while getting major vertical surrounded by the natural scenery of the Crooked River Gorge.

Half-Day of Climbing With a Private Guide

Do you have specific objectives in mind, climbing with a specific focus? This half-day climb at Smith Rock is yours to customize. Rock climbing guides provide expert instruction on your climbing movement, foot-work, and balance. You’ll also be advised on specific hand-grips to go further with safety and confidence.

Work with an expert to find the ideal itinerary for climbing Smith rock to match your skill set and goals. Discover classic multi-pitch routes with plenty of options for the perfect day of climbing. With hundreds of climbs from two to eight pitches, there’s something for everyone in Smith Rock — let your guide show you around the best routes.

Spend the day together as a family and tailor your climbing adventure to fit with even the youngest members of your group. Take a simple day trip from Bend to see the gorgeous natural formations in central Oregon and experience the park’s incredible climbing. Build trust and self-confidence as a family, while giving your kids a lasting memory of a great experience.

Why should I book with 57hours?

With us, it’s all play and no work for you! 57hours is an open platform that connects you with trained and certified outdoor adventure professionals all over the world. Using our tech-savvy, we make it super easy to find and book adventures worth tackling, with guides worth booking, all gathered from the first-hand experiences of the locals who adventure in these amazing locations.

Why should I go rock climbing?

Rock climbing is more than just a sport; it’s problem solving on-the-go. It’s a balance of intuition and fluidity of movement. The fun comes from the possibilities — each route with a variety of options and only a fraction of them leading to success. When you finally master a climb, after hours of practice, it transcends mere sport and is akin to art.

What you get in this adventure package:

Smith Rock has plenty of options for beginner climbers. Whether you’ve never climbed before or are transitioning from the gym to outdoor climbing, your guide will customize the day to suit your skill level and objectives. With a guide by your side, you’ll learn something new, stay safe on the rocks, and most importantly, have fun!

For intermediate to advanced climbers, Smith Rock has loads of routes to spend the day on. Your guide will discuss your objectives and customize the day to your goals. Let your guide plan the day so you can focus on developing your skills while climbing the classic routes or best hidden gems the area has to offer.

Your climbing itinerary will be fully customized to match your skill level and objectives. You and your guide will discuss route selection, skills development, and whatever else you’d like to focus on. From there, your guide will plan the perfect day tailored just for you.

Depending on your objectives, full days may start earlier and end later, but in general, your day will look like this:

For half-day trips during hot weather, we recommend meeting either in the morning at 8-9 a.m. or afternoon 2-3:30 p.m. to take advantage of cooler temps and shade in the climbing area.

What is the minimum age requirement?

What about group sizes and pricing?

For private guided climbing days in Smith Rock, the max client to guide ratio is 5:1 and cost is per person.

For the family day of climbing, the max client to guide ratio is 6:1.

For multi-pitch climbing days, the max client to guide ratio is 2:1.

Costs per person will decrease as the group grows for private tours, so it’s the perfect opportunity to climb with friends and family.

Climbing days can be arranged for larger groups. Contact us to make arrangements.

As the saying goes, “there’s no such thing as bad weather, only bad preparation.” You can expect your guides to be fully prepared for anything. Inclement weather can always get in the way of climbing, but your guide will know the best spots to move to if the weather takes a turn.

On the rare occasion of truly bad weather, your guide will present you with suitable alternatives. The most common practice is to move to a nearby location if it exists, or to reschedule your climbing to a more favorable day.

If climbing is not possible on your scheduled day and no options presented are viable, you will be issued a full refund.

Smith Rock State Park is located in Central Oregon; the town of Redmond is 8 miles away and Bend is 23 miles to the south.

You will meet your guide at the Smith Rock State Park within walking distance of the rock. The exact climbing spot will be discussed after the booking as guides make that decision after considering the skill level of the group and factors such as crag traffic and weather.

Chris is an IFMGA/AMGA Mountain Guide with almost 20 years of experience in the Pac... Your inquiry was successfully sent.
Please try again or contact us at support@57hours.com and we’ll resolve the problem.

$
0
per person
Still have questions? Get in touch

Other things to do in United States You can think of 57hours as the Airbnb of outdoor adventure.

It is a one-stop-shop for booking adventures with experts.