Southern Utah is a world unto itself. Bryce Canyon National Park is truly stunning and stands out among some of the most impressive landscapes in the state — some might say the world. Bryce is also the smaller cousin of Zion, which means slightly less crowds and all-around mania. It feels like the middle of nowhere, which it technically is, but the mountain biking trails are well worth the detour if you’re in the area.

Base your mountain biking trip out of Panguitch

Panguitch is a small town just 25 miles from Bryce with a neighboring lake bearing the same name. Late May to September you can camp around the lake, setting you up for fishing for rainbow trout and access to the nearby track.

I really can’t say enough good things about taking Scenic Byway 143 to this section of Southern Utah. You can make stops along the way at Escalante, known for its slot canyons, rafting and waterfall that flows year round at Lower Calf Creek Falls. If you’re coming to this part of the state, I highly recommend putting your bikes on a rack and making the quintessential American road trip to Panquitch.

Just under 16 miles, Thunder Mountain Trail features plenty of climbing and iconic desert formations outside Bryce Canyon National Park. The descent among the Red Canyon’s hoodoos, towering rock formations, are a trip. We also rode along knife ridges and switchbacks on mostly smooth hardpack. That’s not to say there aren’t some sketchy sections of loose and steep. Thunder Mountain is rated advanced black after all, but most of the trail will present solid blues for moderate riders looking for a worthwhile challenge. As a bonus, the last mile or so is flowy downhill perfect for gliding down. You won’t encounter many steps or drops. Any technical sections are quick and easy to walk if preferred. What makes it harder is that you are riding at over 8,000 feet elevation, but hardly the highest tracks in the area. Climbing is typically moderate and views certainly help as a payoff.

I recommend riding the full loop to get the scenery and views, if you’re up for it. You can also ride from the upper trailhead to the lower trailhead, with a car shuttle back to avoid several uphill sections that are a pain.

Welcome to some serious downhill through gobstopping history. Brian Head Peak is formed of a pale, soft, volcanic rock, deposited during the last 20 million years in an area that is believed to be the bottom of a lake at one point. Pretty wild to think of the desert as a dried-up body of water. The bright pink cliffs of Cedar Breaks are formed of limestone from about 40 million years ago. For the scenery alone, the Bunker Creek Trail is worth a trip. It’s an epic downhill at Brian Head Peak, starting at a mere 11,300 feet. I recommend you bring some layers for this altitude, regardless of the time of year.

You’ll head east to Panguitch Lake on a thrilling 3,000 feet descent. It might sound intimidating, but the trail is doable for intermediate riders especially thanks to shuttle service for the return trip. The singletrack trail is 11.6 miles long and is worth paying for a shuttle to get there and back. The bike shops in Brian Head provide shuttle service for around $25 per rider. You’ll get a ride up to the trailhead on Brian Head Peak, then scooped up at Panguitch Lake once you’ve unclenched your hands from the bike. 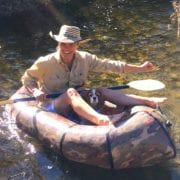 Katherine Peach is a writer and content strategist for magazines, websites and purpose-driven businesses. Now living in Aspen, CO, she’s known to hike a 14er, navigate white water in an Alpacka Raft, and partake in ski touring, sometimes while on a hut trip. She also has a 300 YTT certification, so you’ll find her on the yoga mat and the mountainside almost daily. Discover more of her adventures at katherinepeach.com.